10 Interesting Facts To Know About Leh Before Planning Your Trip!

With Responsible Travel Tips for you! There is a never-ending element of magic connected to the land of Leh-Ladakh. In the remotest of destinations in India, with landscapes so captivating and people so welcoming, the mountain land of Leh is an enchantress. While you sit down to plan your Leh trip, you can go through these interesting facts that will help you organise it in a responsible and much better way.

As they say, travelling comes not only with fun but also with a lot of duty towards the places you visit. Go through these facts about Leh, along with some responsible travel (RT) tips for each fact, and become a great Responsible Traveller while planning your trip.

1. You are on a High Altitude Terrain

Ladakh translates to “the land of high passes”. Leh is a mountain-framed town lying at an altitude of 11,562 ft. in the Himalayas. It is important to note that the Leh-Ladakh region experiences very less rainfall and is a dry region. The mountains are sparsely covered with vegetation and create a desert-like impression.

RT Tip: Make sure that you consume water consciously and do not use it unnecessarily here in Leh-Ladakh.

2. Be ready to take on Leh’s climate

Planning your trip to Leh is both exciting and tricky, due to the far from the normal climate of the place. The Ladakh region including Leh is a dry and cold region with sunlight hitting you at its best. It is important to travel with ample preparation in terms of your medical supplies, money, clothing, and protective gear considering the season you are travelling (Winters are harsh in Leh).

RT Tip: Considering the high altitude of the place, there is a high chance for inexperienced travellers to meet with altitude sickness. Hence, make sure to get acclimated on arrival before heading out to explore the place.

3. Some Demography of Leh

Being one of the remotest places in India with harsh living conditions, Leh and other valleys of the Ladakh region are the least populated with only indigenous tribes, shepherds, and monks on the list. According to the recent census statistics, Leh has a population of roughly 1.2 lakhs. The ethnic groups in the region belong to Buddhist, Muslim, and Hindu communities. The people of Leh are involved in agriculture and cultivation, cottage industries, and tourism-related activities.

RT Tip: While exploring Leh, interact with locals and understand the social reasons behind such a unique demographic set-up.

4. Live with the best hosts in the world

Ladakh hosts a different and charming world altogether from the Indian mainland - the people, their customs, traditions, food, and clothing. The people of Leh are warm and welcoming souls with warm smiles on their faces. The local natives belong to the Tibetan-Mongoloid race. However, Leh is also inhabited by communities from other parts of Jammu and Kashmir. One can find monks dressed in maroon robes and villagers dressed up in traditional tribal dresses here. They are happy and hardworking people who fight their way through the harshness of the land with smiling faces.

RT Tip: Live together with a local of Leh and experience their true culture. You can book an authentic NotOnMap homestay in Leh-Ladakh to experience the warm hospitality of the people of Leh.

5. Leh and its history

Leh is historically significant having its own place both in the contemporary as well as the ancient history of the Himalayan belt. Leh-Ladakh region being a trade-route stopover played an integral role in the ancient trade links from China to Kashmir and further east of the region. Somewhere in the 8th century, the ideology of Buddhism spread across the land of Leh and has been part and parcel of it ever since.

RT Tip: This is just an overview. Dive deeper into the history of Leh when you stay along with a local of that place. Make sure that when you return home, you have unique stories to tell to people.

6. Myths and Beliefs in Leh

Being a far-off land, so close to the wilderness of nature, Leh is a place with numerous myths rooted in its soil. Connected with their religious beliefs and long-existing oral tales, the people of Leh and elsewhere in Ladakh have unquestioning acceptance of the concepts of spirits, omens, and mythology. The spiritual leaders and godly men have a lot of respect among the people.

RT Tip: Try to understand and accept their unique culture, rather than being prejudiced about the local legends that seem impossible for you to believe. 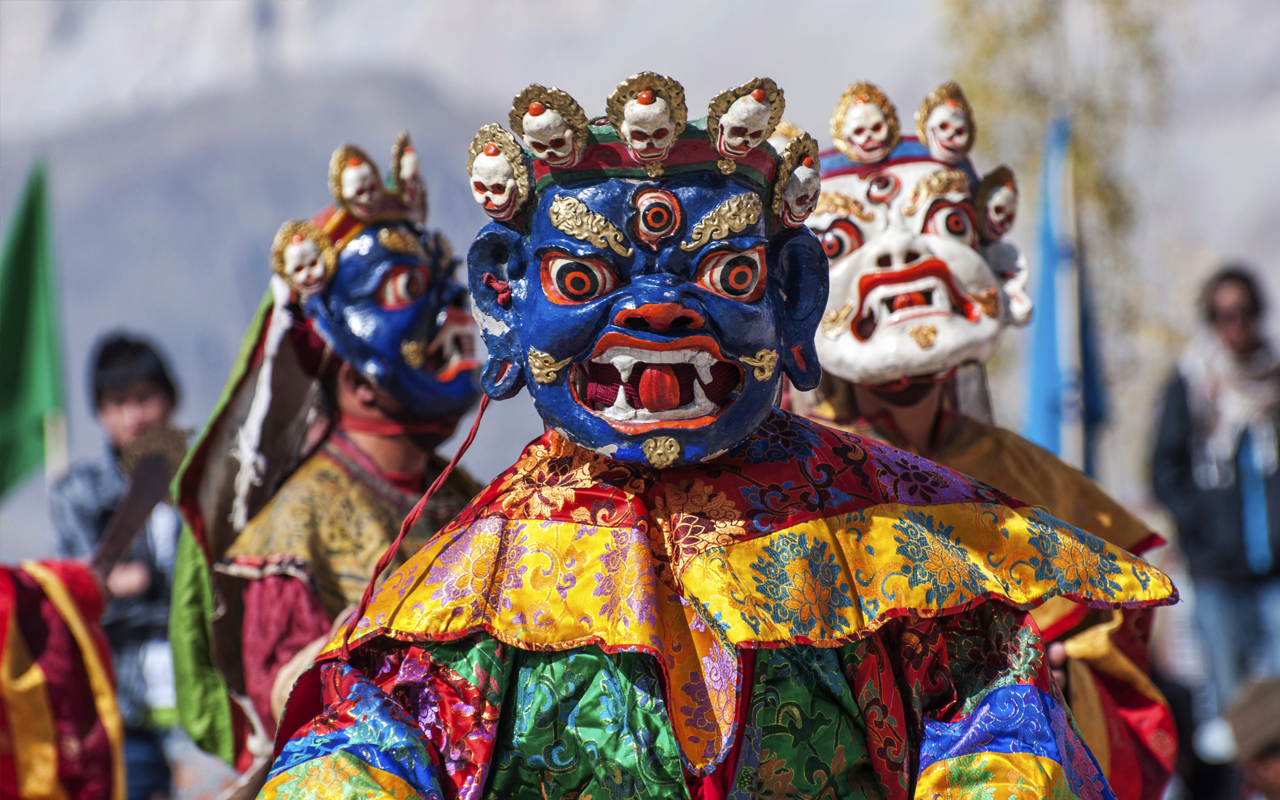 Buddhism being the largest religion in Leh makes the place home to numerous monasteries. The Namgyal Dynasty, the rulers of Leh who reigned from the Leh Palace believed in Tibetan Buddhism. Travellers can spot colourful prayer flags flying in the gushing wind and stupas dotted across the land. Leh is home to some of the world's most significant and oldest Buddhist monasteries like Thiksey, Spituk, Hemis, Likir, etc.

RT Tip: When visiting these monasteries and sacred monuments, make sure you adhere to the accepted culture of the place.

The people of Leh celebrate festivals related to agriculture and the monasteries with great enthusiasm. The Hemis Festival at the Hemis Gompa in Leh is by far one of the most colourful festivals to experience at least once in a lifetime. It happens every year on the 10th day of the Tibetan Lunar month on the birth occasion of Guru Padmasambhava. Vibrant mask dance is performed at the monastery during this event. Leh also hosts various other festivals like the one in Hemis Gompa as well as harvest festivals.

RT Tip: Don’t just travel to see the natural beauty or just the famous hotspots of the place. Live and experience the local festivals of Leh together with the local people.

Just like the culture and geography, the food in the Leh-Ladakh region differs significantly as well. To a major extent, the culinary tradition of Leh and neighbouring regions has a strong Tibetan influence. Every trip is incomplete without having a taste of the local delicacies. Leh features numerous local cuisines native to the region like Skyu, Thukpa, Momos, Tingmo, etc. Being a dry land, Barley is the only grain that grows abundantly in the region. Tsampa is the staple food of the region - a dried-roasted and grounded flour form of barley grains.

RT Tip: Get to explore such traditional cuisines with NotOnMap’s Meal With Local Experience where you eat at a local’s home together with them.

10. Attractions in and around Leh

Leh showcases unique and fascinating sights and attractions. The grand old Tibetan Monasteries, Royal Palace of Leh, Magnetic Hill, Sangam Point, etc. are a few of the attractions. There are also spots for stargazing near Leh which features an amazing view of the starry skies attracting both professional astronomers as well as tourists. Trekking, Cycling, Camping, Shopping - there are so many things to do in and around Leh!

RT Tip: Just simply be a Responsible Traveller. Explore the place, Respect the culture, and Make bonds with people.

Now that you know what is in store for you in Leh, you can easily plan your trip and navigate accordingly. Leh is rich, both naturally and culturally. Don’t just visit it, travel there to impact and live like a local in the true sense.

A passionate storyteller and filmmaker in the making who has been backpacking across India, creating memories together with travel content. Prior experience working with Responsible Tourism initiatives in Kerala curating unique and tailor-made travel experiences that showcases the local culture, heritage and untold stories.